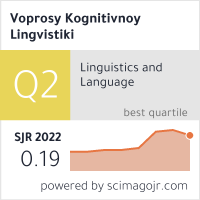 To publish an article in the journal

WE INVITE YOU TO COOPERATE

We also invite authors who are engaged in research in the field of Cognitive Linguistics to publish their scientific works in one of the issues of the "Cognitive Studies of Language" series. For more information go to the page.